Part one of our conversion to a non-profit has been completed, We are now a Wyoming non-profit corporation but we are still working on our tax status with the IRS. To learn more click here or to donate please click here
By becoming a non-profit we can further our cause to help you stop the anti-gun activists in their tracks.

That Airport Carry Map Could Get You Arrested, Or Even Worse

Soon after the shooting that occurred inside the Fort Lauderdale airport terminal the topic of carrying a firearm in an airport quickly took off among both pro and anti-gun groups. Right about this time a so-called 'airport carry' map began circulating on social media. 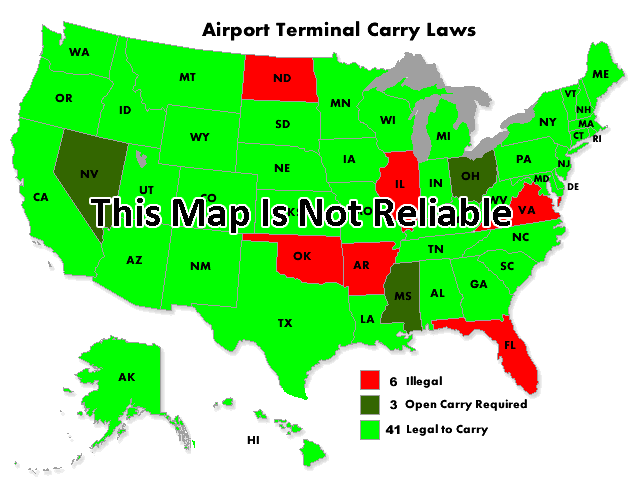 I have to be honest, the first time I saw it I didn't give it much thought, you see these things all the time and after a while your eyes just glaze over but when I saw it a second time I paid attention and was quite suspicious of it.

The map shows all but six states allowed carrying firearms in the non-secure areas of an airport and shows three states where open carry is supposedly legal. I tracked the map down to an article on a Florida pro-gun organization website that was titled 'Airport Carry is legal in 44 states, but Florida will put you in jail'. This just didn't seem right so I set out to verify their claims.

I soon stumbled upon a paper that had been done by a district attorney that showed this map and then went on to discredit it state by state. Not knowing who was right I decided to track down the information and verify it for myself. What I found shocked me and showed that this map was not only incorrect, it could be down right dangerous should anyone blindly follow it.

What I found was that the author of this map, and article, did no more than a cursory look at state laws. If there was nothing explicitly banning carrying firearms in an airport they included it in the 'good' column. Furthermore they interpreted language that stated 'licensed carriers could not enter an airport' to mean open carry was legal. As with anything regarding laws like this, one can not just 'skim the surface' and correctly make a conclusion.

What they failed to consider when making their conclusions were states that do not have preemption laws, states that allow exemptions for local governments, government under 'home rule' and airport specific bans in three states. Lastly they failed to look for laws allowing posting of no firearm signs in 'public safety areas'.

So let's take a close look at their map and then the correct information.

If your eyebrows raised when you saw NY & NJ as allowing airport carry you aren't alone. Having lived in NJ and now based out of eastern PA we know all too well how restrictive their state laws regarding firearms are. There have been instances of people transporting a firearm per federal guidelines that have been arrested or detained at airports in those two states. While upstate New York airports (Buffalo and Albany) may be safe to carry for those with carry permits, the major airports in NYC are questionable. I also classify New Jersey as a "don't even think about it" state so that comes off the 'good' list immediately.

After doing some exhaustive research I found there are actually only 26 states (as opposed to their 44) that have no specific laws regarding carrying in the non-secure areas of an airport. These states also do not have any local restrictions. At the same time I found 5 states where airports can be posted, 5 states where local government can ban carrying, and 3 states where carrying is banned in specific airports. All of these were classified as 'good' on their map.

The three states that have airport specific bans are North Carolina, Missouri and Massachusetts. In North Carolina both Raleigh-Durham and Charlotte airports restrict carrying. The restrictions come from local ordinances. In Massachusetts carrying is banned in any airport that falls under the Port Authority's jurisdiction, otherwise know as a MassPort airport. The restrictions come from the Port Authority's own regulations. Lastly Saint Louis (STL) airport is controlled by the city which prohibits carrying on any airport property.

I then started researching the three states that were marked as 'open carry' in airports. What I found was law that specifically stated 'licensed carry' was prohibited in Mississippi and Ohio. This is where their assumption that open carry was legal came from but again, assuming with firearm law is never a good thing.

I contacted the Ohio attorney general's office and while they explained they couldn't give legal advice, they did look at the statute and commented on how someone could assume that. They directed me to several senior firearm officers, at several sheriff's departments, and they too confirmed that while the language appears to allow open carry airports are considered 'protected areas' and ban the carry of firearms in any fashion. They also stated all airports are posted. Note that in March of 2017 airport carry will be legal after the passage SB199 in December 2016.

Researching Mississippi law I also found the same type verbiage about 'licensed carry' so again it was assumed that open carry was legal. I could not specifically confirm or refute this with any state official. I did however find several opinion pieces on the state attorney general's website regarding restricting open carry that state 'any such laws would have to pass constitutional muster.' They go on to say the courts have only said concealed carry can be regulated. There is an exception though under §97-37-7 for those that have completed the required training and have an enhanced permit. Our determination is it MAY be legal to open carry but there is no case law to clarify it, and open carrying into an airport in the state is at the carriers own risk.

Nevada is the only state where I was able to confirm from multiple sources that open carry in an airport is legal. The thought process everyone has taken is open carry can not be regulated by the state because of the state constitution which states in Article 1, Section 11, [1.]: “Every citizen has the right to keep and bear arms for security and defense, for lawful hunting and recreational use and for other lawful purposes.”

So per my research all of the following states restrict, or can restrict either by posting or local ordinance, carrying of firearms in airports: AR, CT, FL, IA, IL, KS, MA, MO, MS, MT, NC, ND, NE, NJ, NY, OH, OK, SC, TN, TX, VA, WI, WV. That's 23 states, not even close to the 6 shown on that map. Here's what the map should really look like: 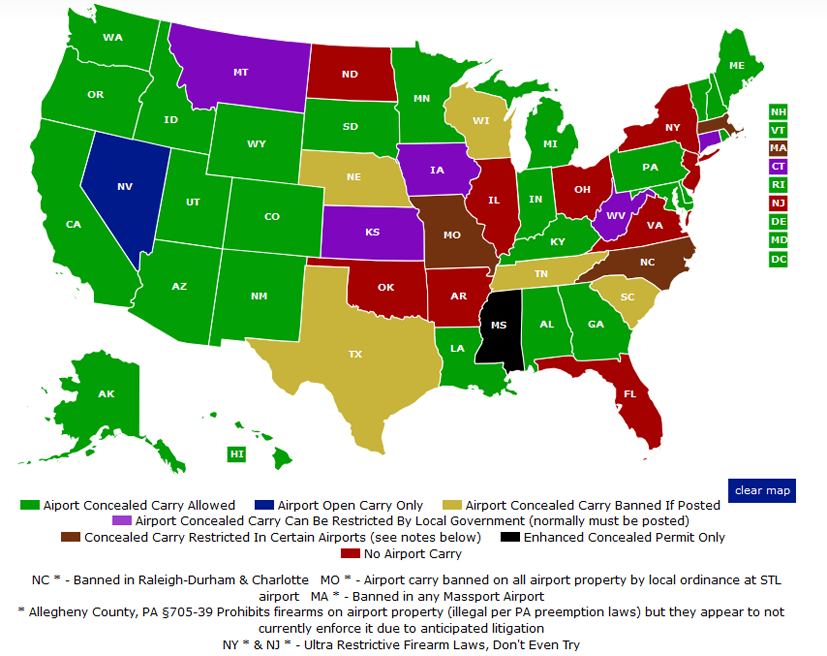 So the next time you see something similar to this map make sure you verify the information, assuming the information is correct could get you arrested, or even worse.

To read my findings state by state please see our airport carry pdf and to see our interactive version of the map please click here.

Update: After publishing this article we were informed of a ban at Saint Louis (STL) airport by local ordinance. A copy of the ordinance can be found here. The article has been updated to reflect this information.

* Allegheny County, PA §705-39 Prohibits firearms on airport property (illegal per PA preemption laws) but they appear to not currently enforce it due to anticipated litigation

Sign up today to get the most out of our service. Track pending legislation, contact legislators, get email alerts about legislation you care about and much, much more.

Title: The possession of a firearm by a person who has committed a misdemeanor crime of domestic violence or by a fugitive from justice and providing a ...

Description: The possession of a firearm by a person who has committed a misdemeanor crime of domestic violence or by a fugitive from justice and providing a ... ...